WHAT IS SO SPECIAL ABOUT CROWS?

Many interesting kinds of crows!

Our study focuses on the familiar American crow of the USA and Canada, but this is just one of over 40 species of crows and ravens worldwide. It has one of the broadest ranges as a species, being found in most places across the North American continent except for the far South West. 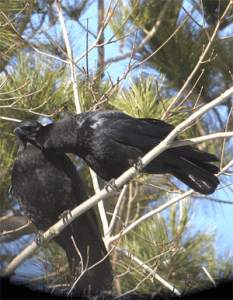 Social crows! Behavioral ecologists
find American crows particularly interesting because their complex social system is very reminiscent of our own and rare in other animals. American crows are “cooperative breeders”; they defend family territories, in groups of 2 (a mated pair) to over a dozen birds, including the pair, their juveniles, their older offspring of previous years, and other related or unrelated birds. But crows leave their territories to find food, gathering in flocks where food is plentiful (e.g. beech nuts in fall), and sometimes to roost together. In northern areas, American crows migrate south hundreds of miles. Find out more about our 26-year study of tagged crows.

Smart crows! Crows of many species are emerging as some of the smartest animals on the planet! The New Caledonian Crow makes elaborate tools to capture huge grubs, its major source of protein in its island home. They even have cultural differences in tools on different parts of the island. Other crows can solve problems requiring counting, matching, and remembering the personal idiosyncracies of others. Common ravens can cooperate to solve problems but they refuse to cooperate with others that “cheated” and kept the reward.

Urban crows! Crows are now members of the urban community of organisms. Some biologists are interested in what characteristics allow crows to adapt to this very different environment.

WHY DO CROWS LIVE AND ROOST
IN CITIES?

First, what is a crow ROOST? Many birds gather in groups to sleep, probably because there is safety in large numbers. The place where they sleep together is called a “roost”; the behavior of settling on branches to sleep is called “roosting”. Crow families roost in trees on their territories in summer. In winter especially, crows may come from miles away to join others at a “communal roost”. On the way, smaller groups may converge and stop for a bit of foraging and socializing before dark in “pre-roosts”, then make the final move into the communal roost at dusk.

Crows and humans have a long, interesting history living near each other, as John Marzluff has described in In the Company of Crows and Ravens.  But American crows became city residents only recently, in the 1970’s. Biologists hypothesize that cities were safe havens from hunting and from crow predators, such as Great Horned Owls and large hawks, but also a source of year-round, dependable, if dubiously nutritious food. Our street lights may also play a role. In the winter, owls at night are the main danger, besides weather and hunters outside city limits. Like most diurnal birds, crows cannot see well in the dark; by roosting near lights in cities, crows may be able to see and flee these nocturnal predators.

CROWS ARE PESTS AND EAT OUR CROPS, RIGHT?

Crows are more likely to be eating the larvae of insect pests than the crops. Crows are “omnivores” like us and can eat a wide range of foods, but they prefer high quality foods like insects, roadkills, nuts, and small fruits. Their nestlings in particular need a diet high in protein and fats to grow well. As early as 1908, Dr. Kalmbach of the USDA found that the insect pests that crows were eating in agricultural fields more than paid for the small amount of damage they did to seedlings or corn ears. As a farmer, you should be happy to see crows patrolling your fields!

CROWS APLENTY vs CROWS IN DANGER!

Given the huge numbers of American crows in some winter roosts, you might think that all “crows” are doing just fine. (Remember: we need your help to estimate how many American crows are spread across NY State and elsewhere in the winter!)

Sadly, other crow species are in danger of extinction. The Hawaiian crow is extinct in the wild; only about 115 birds exist in captive breeding facilities and there is little hope to return them to their home where native predators and introduced bird diseases still exist. Another Pacific island crow, the Mariana crow or “aga”, is also in danger.  After going extinct on Guam due to the introduced Brown Tree Snake and habitat loss, the sole remaining population on the nearby island of Rota, fewer than 300 individuals, is declining, probably due to feral cats and habitat loss.  So many crows to study, so little time!

WHAT IS A NITROGEN CYCLE? SHOULD I CARE?

You should care! Nitrogen is an essential element for all life because it is a key component of amino acids, the building blocks of proteins. The Nitrogen Cycle traces the passage of nitrogen through the various parts of the ecosystem, as it moves between the air, soil, water and organisms and is transformed at each step. Nitrogen gas present in the atmosphere is “captured” and converted in steps by specialized bacteria into nitrate and ammonia, from which plants build proteins. As animals eat plants or each other, the nitrogen moves from one organism to another; waste nitrogen is released as ammonia, some of which is converted back into nitrogen gas by other bacteria. While nitrogen is vital to life, too much of a good thing can be problematic. Human activities have altered the Global Nitrogen Cycle, concentrating nitrogenous materials and causing them to become pollutants, especially in water. 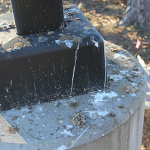 HOW COULD A CROW ROOST AFFECT NITROGEN CYCLING?

While human activity can affect the Nitrogen Cycle globally as well as locally, crows affect the cycle on a smaller scale. Wherever crows forage during the day and roost communally at night, they incidentally concentrate their nitrogenous waste products in a single area, creating large “pools” of nitrogen which, in turn, have potential consequences for the ecosystem and its processes. When the numbers of communally roosting crows reaches its peak in winter, the effects on the way nitrogen cycles below their roosts may dramatically increase.

CHECK OUT THESE SITES FOR MORE INTERESTING CROW INFORMATION: